As the Black Lives Matter movement grows and protests and arrests continue in Ferguson, Missouri, author Jack Cashill charges the Democrats are responsible for creating a monster they can no longer control.

“The seeds of Ferguson were planted in Sanford, Florida, two years earlier with the shooting of Trayvon Martin,” Cashill told WND. “The incident gave the media a chance to reinforce their place among the morally elect and gave the Obama administration a useful wedge issue to stir up the Florida base for the 2012 election. Ferguson served much the same purpose, truth be damned.”

“The Democratic Party is unsustainable without 80 percent or more of the black vote. This plague of dishonestly stoked Ferguson-style rage is the Democrats’ problem. They cannot begin to solve it without alienating their base. So they won’t even try. Republicans would do well to say as little as possible until the rage subsides.” 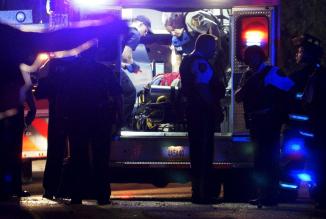 A St. Louis County police officer looks at a black man who has been loaded into an ambulance after a police officer-involved shooting in Ferguson, Missouri August 9, 2015. REUTERS/Rick Wilking

In an exchange with The Hollywood Reporter, Fox News chairman and CEO Roger Ailes provided some closing thoughts on the “bitter” and “disappointed” Jon Stewart, who is walking away from the “Daily Show” after years of failing to take down Fox and Ailes.

“He’s been after us for years,” Ailes told THR after being contacted for comment. “Occasionally we pay attention. We think he’s funny. We never took it seriously and he never made a dent in us.”

Ailes then described what he suspects is the overriding feeling Stewart is facing as his Daily Show career comes to an end: “disappointment.”

“As he faces the end of his career, he’s beginning to wonder: ‘Is this as popular as I’m ever going to get? Is this as much power as I’ll ever have? The one person I could never get rid of was Roger Ailes. I tried. I did everything I could.’ This was all a plea to his lefty friends. I think he’s disappointed that he didn’t accomplish that goal, and we, of course, supplied him with half of his comedy. It’s just a matter of disappointment.”

“He’s feeling unrewarded because Fox News beats him on the amount of money we make, on ratings and on popularity,” said Ailes. “I’m sure it’s very depressing when he sits home at night and worries about it. We never did.”

Ailes did have several compliments for Stewart, whom he praised as a “brilliant comedian,” a “good father,” and generally “very nice guy.” The problem, Ailes suggested, is his “bitter view of the world.”

“He has a bitter view of the world and you see it embodied in how he’s reacting to Fox News, equating it with death,” said Ailes.

The “death” reference is to a “Daily Show” episode this week in which Stewart once again took aim at Fox News, ending the segment on what THR describes as “an unusually serious note”:

I’m just playing around with you guys. Your hypocrisy isn’t a bug in the Fox model. It’s the feature. Your job is to discredit any source of criticism that might hurt the conservative brand by angrily holding them to standards you yourselves jettisoned in your news network’s mission statement. But I’d be happy to listen, if you make an actual argument.

Ailes shrugged off Stewart’s “serious” attack by turning it back on the “bitter” Stewart.

“You can’t say that many negative things about people unless you’re really unhappy about something,” he said. “I actually think he doesn’t dislike me. We met once or twice. I talked to him for an hour once in my office. I think he’s really smart and he’s got a great future.”

Regarding that future, Ailes knocked Stewart for his directorial debut, the film Rosewater, which managed to only earn $3.1 million worldwide. “Knowing him, he’ll direct movies with sort of a left-wing point of view, and America’s a terrible country,” said Ailes, adding that he’ll need to find another niche because 90% of Hollywood already does that.

When asked if Stewart could ever work for Fox News, Ailes replied, “No. He can’t come over here. He would depress everyone. I could get him a job. Not on air. As a stage-hand.”